I decided to combine a soft start schematic with push button toggle switch schematic to create a module ready to be used in a power amplifier or some other power consumer.

I experimented with two different schematics - one with CMOS logic 4027 and other with dual timer NE556.


The first schematic uses J-K trigger (flip-flop) connected as T-trigger (flip-flop). When the button is pressed the state of the trigger is changed. When going from OFF to ON state the signal is passed via a resistor and a capacitor to the second part of the schematic.
There the second J-K trigger is wired in a very unusual way with the reset pin connected high and the set pin used as input. Here is the datasheet of the 4027. In the truth table we see that when the reset pin is high all other inputs are ignored except the set pin.When the set pin is high, the output is also high and when the set pin is low the output is low.
The resistor R6 and capacitor C6 are used to delay the signal from OFF to ON state. With the values used in the schematic there is about 1 second delay. With different values it is possible to change the delay time if needed. The diode D2 shunts R6 when schematics goes from ON to OFF, so the second relay to be switched off without delay. 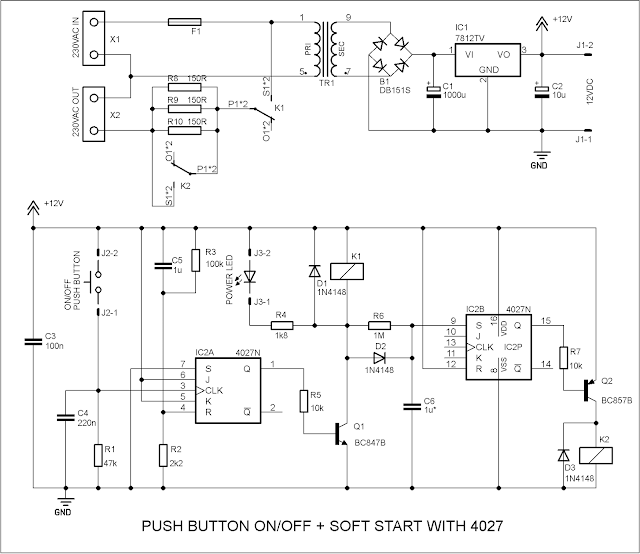 The second version uses a dual timer NE556. This one is more trivial. The first timer is wired as push button toggle switch and the second is an ordinary switch connected again with delay circuit R5, D2 and C6. 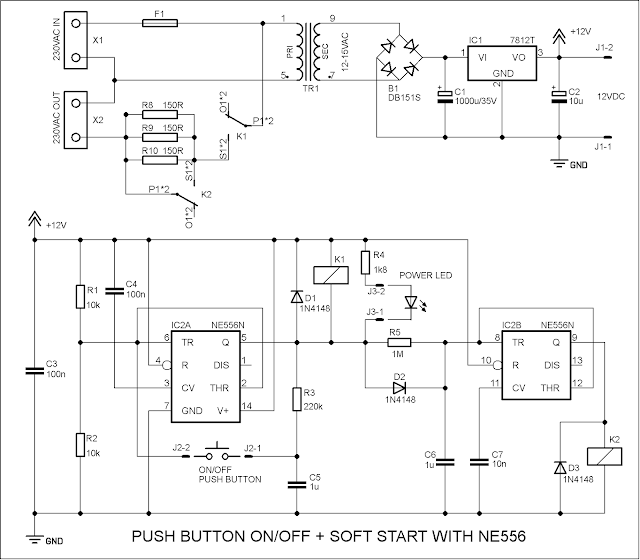 Both schematics share the same power supply circuit and soft start switching is the same.
The resistors R8-R10 are 150Ohm/10W and are connected in parallel resulting a 50 Ohm / 30W resistor. On the PCB two of them are side by side and the third is on top of them in the middle.
T1 is small 2-5W transformer with 12-15 VAC secondary wiring.
J1 connector is used if 12VDC is needed  for some external schematic, for example speaker protection or IR remote control module or even temperature controlled fan.
J2 is for connecting the momentary push button.
J3 is for connecting the LED, indicating power state.
K1 and K2 are 12V relays capable of switching 230VAC/16A.
F1 must be chosen according the device that would be connected to the soft start module.

Personally I prefer the first schematic. I tested both schematics on breadboard and both worked, but the second is prone to interferences - when the cable connecting the push button to the board is long and some powerful appliance is switching on or off nearby, there is a chance for false switching of the schematic.

There must be great care when working with mains wiring or else there may be fatal consequences.

Most of the resistors, capacitors and diodes in the PCBs are SMD. Lately I am using more and more SMD elements in my PCB designs because this saves drilling holes which is very annoying :)
If you decide to use any of these two PCBs, check them thoroughly, because they are not tested by me yet.

P. S. I found a mistake in PCB - wrong spacing of the relay pins, so I temporarily removed the download links until I fix the issue.

P. P. S. The error in the PCB was corrected and the download links are  back again :)
Here are pictures of the finished module: 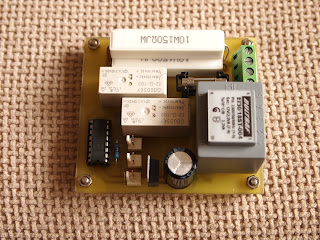 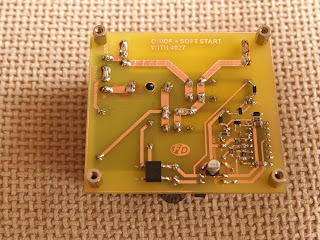 This short clip shows first schematic in action on the breadboard.
The C6 in the video is 10uF so that the delay is clearly visible.