Here is another piece of laboratory equipment - LC meter. This type of meter, especially L meter is hard to find in cheap commercial multimeters. Schematic of this one came from this web page: https://sites.google.com/site/vk3bhr/home/index2-html. It uses PIC microcontroller 16F628A, and because I recently acquired a PIC programmer, I decided to test it with this project.

Following the above link you will find the original schematic, PCB, source and HEX files for programing the microcontroller and detailed description.
Here is my adaptation of the schematic:

I removed the 7805 regulator, because I decided to use a 5V adapter from Sony mobile phone.
In the schematic, trimmer-potentiometer is 5k, but actually I put 10k, after consulting with the datasheet of the LCD module I bought.
All three 10uF capacitors are tantalum and C7 - 100uF actually is 1000uF.
Two 1000pF capacitors are styroflex 1% and inductor is 82uH.

Total consumption (with back light) of the device is 30mA.
R11 limits the back light current and must be calculated according to the actual LCD module used.

I used the original PCB as a starting point and modified it to suit better to my components.
Here is the result: 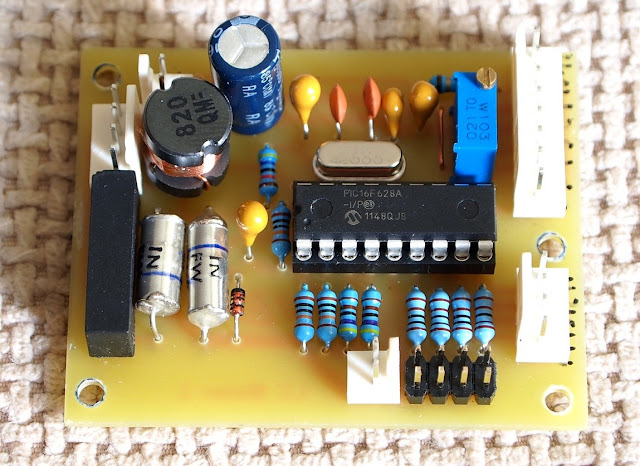 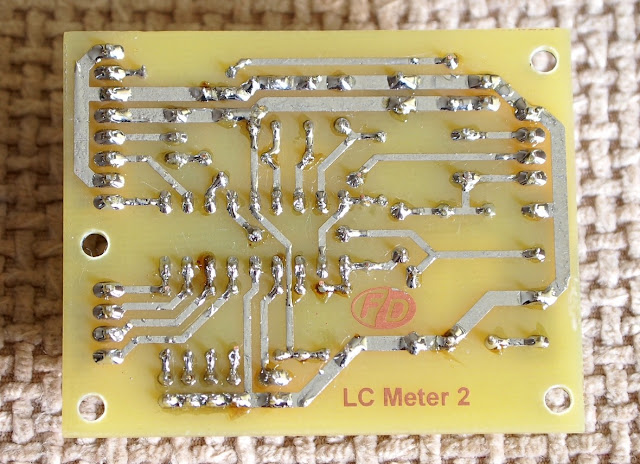 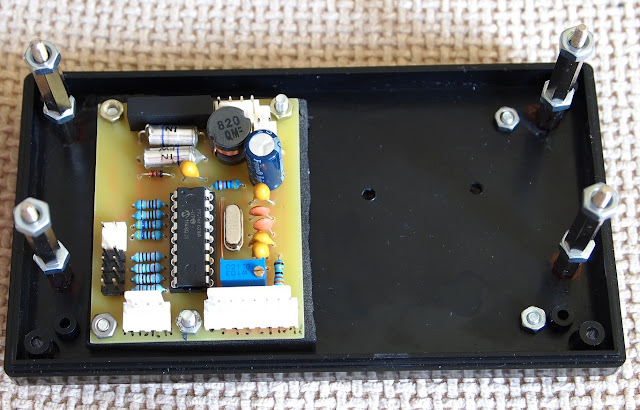 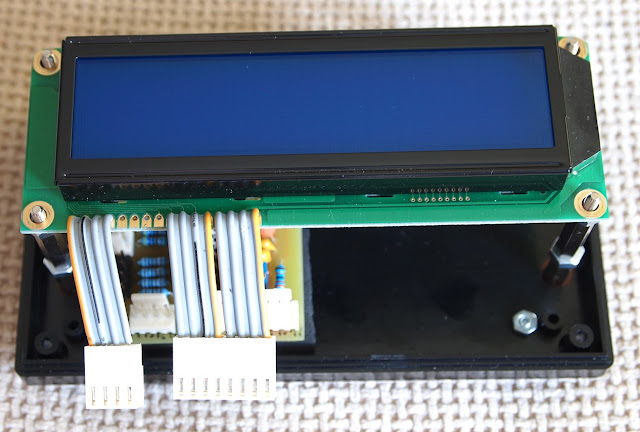 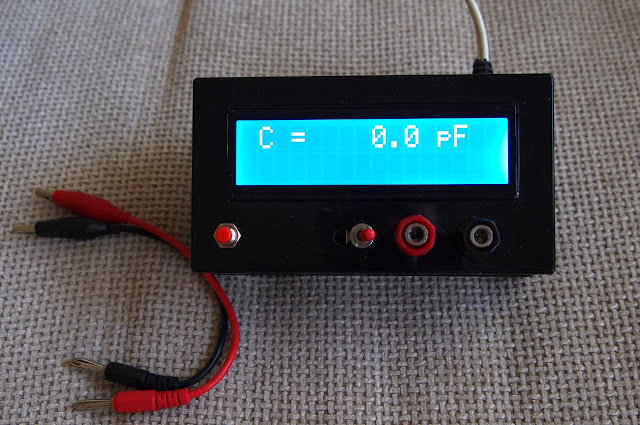 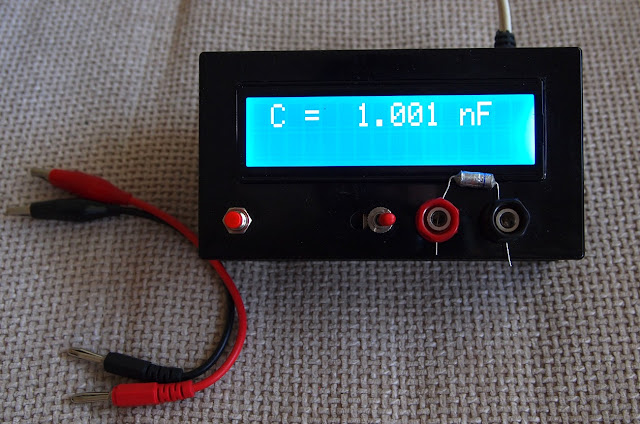 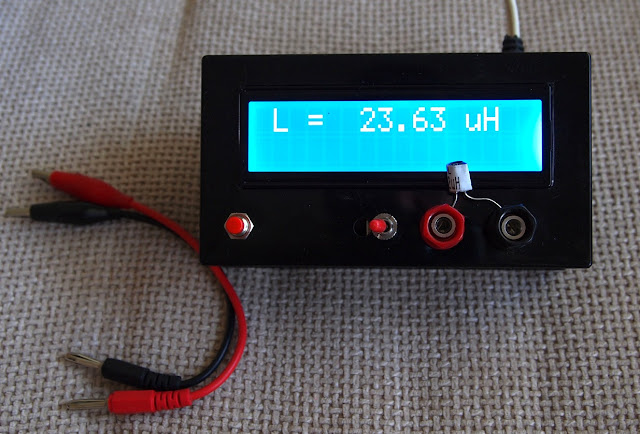 The last two pictures shows LC meter in action. In the first of them, there is 1nF/1% capacitor and in the second - 22uH/10% inductor. The device is very sensitive - when I put the test leads there is 3-5 pF reading on display, but it is eliminated with the calibrating button.

If anyone want to try this project, here are the PDF files for downloading: LCmeter2.rar
Use them on your own responsibility.

One of my colleagues in a Bulgarian audio forum ask me to build him a copy of the LC meter, but this time with 9V battery power supply.
I made a new PCB with little rearrangement of the old one and adding a 78L05 voltage regulator. I also added an automatic sleep mode, schematic of which I found here: http://www.marc.org.au/marc_proj_switch.html

After some tests, the value of the C10, which defines the ON time, was chosen to be 680nF. The ON time in this case is 10-11 min.
The MOSFET Q2 may be replaced with BS170, but bear in mind that the leads are in reverse order. 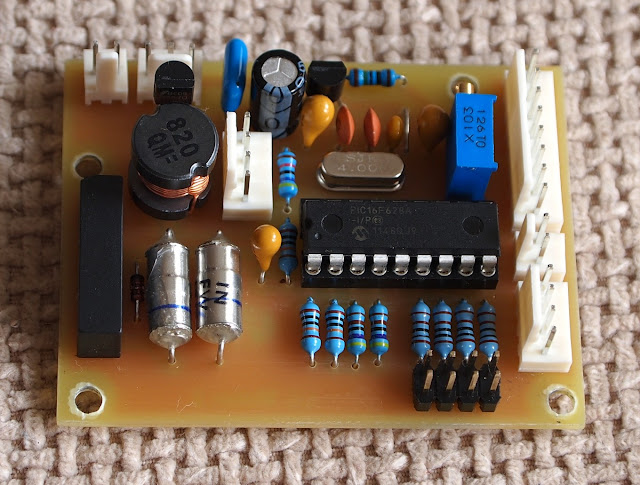 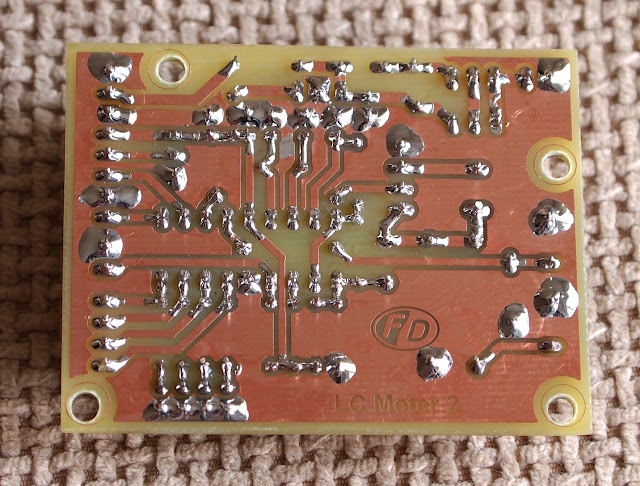 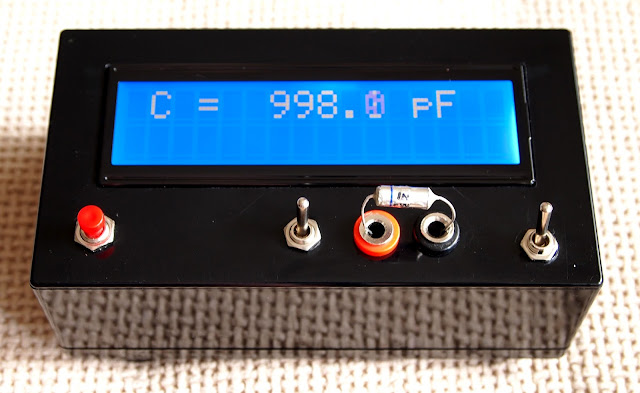 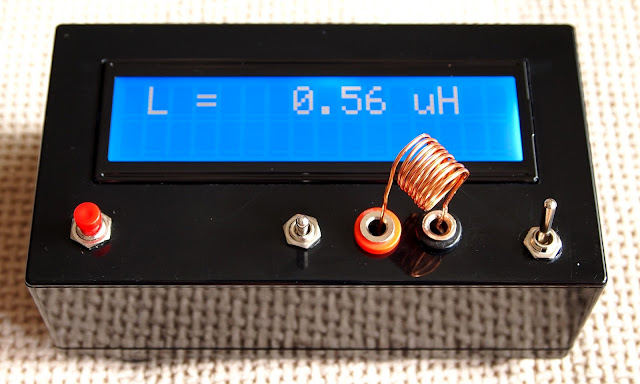 As usual you may download the files for the project from here: LCmeter with PS.rar
Use them on your own responsibility.

Recently I took apart this LC meter and as I saw how ugly was the PCB, I decided to make a new (I hope better) PCB for this old project. The PCB is designed to be used with standard 80mm LCD 16x2 display with back light. The intensity of the back light can be adjusted with changing the value of R11 in the schematic.
On the board there is two wirepads for connecting input terminals via wires, but you can also solder standard 8 pin female header and use the module without enclosure.

I have not build the last version myself so there is possibility for mistakes - check it thoroughly.
Here you can download archive with new PCB: LC meter with PS
As many people had asked me for the HEX file, I included it in the archive.

UPDATE: 29.01.2019
I have tried WIMA capacitors model FKP-2 100V 1% in the other LC Meter project - LCM3 and they worked great. That's why I made modification of the PCB, so now there can be fitted different packages for C1 and C2. Also I included Gerber files for easy ordering of PCBs from Chinese manufacturers.
PCB with Gerber files: LC meter with PS
в 01:02