I have ordered 10 pcs of addressable LED from Aliexpress some time ago and tested them with my Arduino boards and the library from Adafruit and they work as expected. But of course I am more a PIC guy, so I start to thinker with some PIC microcontrollers trying to drive these LEDs. And it is not easy! So the major difference between 8-bit PIC micro and a ATMEGA 328P is that the ATMEGA command rate of ATMEGA is the same as clock rate, so it has 16 MHz clock frequency and 16 MHz command rate but the PICs have command rate 4 times slower than clock frequency. So a PIC clocked at 16 MHz will have 4 MHz command rate and 32 MHz PIC will have 8 MHz command rate. In order to achieve similar performance as ATMEGA, the PIC must be clocked at 64 MHz.

The difficulty comes from the very high frequency and the format of the output signal. The frequency of NeoPixel signal is ≈800 kHz and the "1" have 800 ns high followed by 400 ns low. The "0" is 400 ns high followed by 800 ns low. And 1 instruction of 32 MHz PIC microcontroller take 125 ns to execute. It is impossible to write a C code that can create such signal in 9-10 instructions. This is achievable only with carefully written Assembler. I had success with PIC16F1847 clocked at 32 MHz.

It was pain in the a**, because there are very little info and tutorials about writing mixed code (C and assembler) for xc8. For example I couldn't find a way to declare a variable in BANK0 in assembly code because the variables in C code evidently take precedence and occupy all the free space in BANK0 first. And it is important the variables to in the same memory bank as PORTB, because changing banks takes one additional instruction. So I has to declare the variables in the C code specifying the exact address...

Then I got a more modern PIC - PIC16F15344, which have 4 very interesting modules: Configurable Logic Cell (CLC) each of which can be set as 4-input AND, AND-OR, D-type flip flop, J-K flip flop and couple of other types. Also I saw a video from the great Ben Heck where he is using the SPI output from ESP32 with some external logical chips to form the output signal compatible with NeoPixel.

My thought was to feed the color bytes to the SPI module (configured to work at 800 kHz) and the output (clock and data) to use somehow to form impulses with different length and then combine them with CLC. The following screenshots are the settings of different modules used in this project. 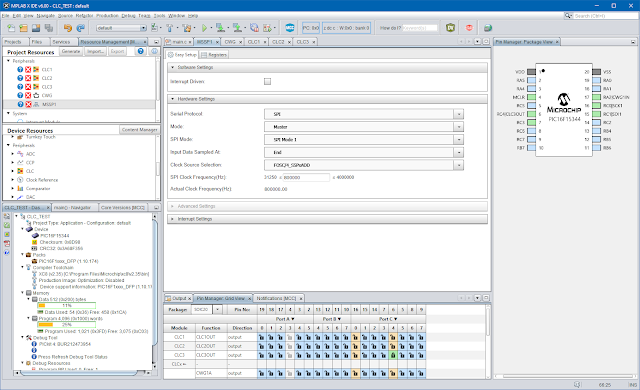 The CLC1 is configured as AND-OR and the signal from the SPI is directly routed to the output. This will be needed later. 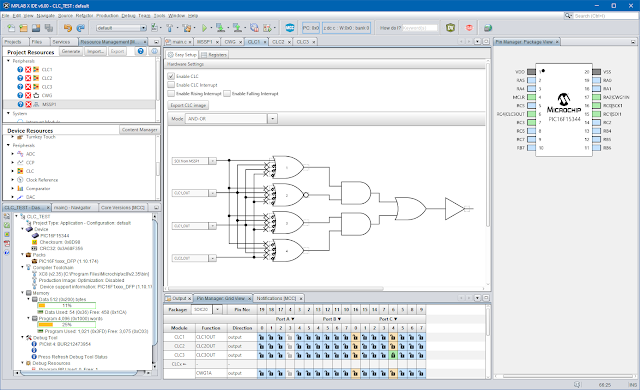 For creating the waveforms of "0" and "1" I used the Complementary Waveform Generator (CWG). This module is used to create a signal for driving half-bridge or full bridge circuits and among other setting there can be set a dead time. So I fed the signal from CLC1 (which is a copy of SCK signal and have 50% duty cycle or 600 ns high) to the CWG module and set the dead time of the rising edge to be about 400 ns and when inverted this will be the "0". The dead time of the falling edge is set to be around 200 ns increasing low time to 800 ns and when inverted form the "1" waveform. 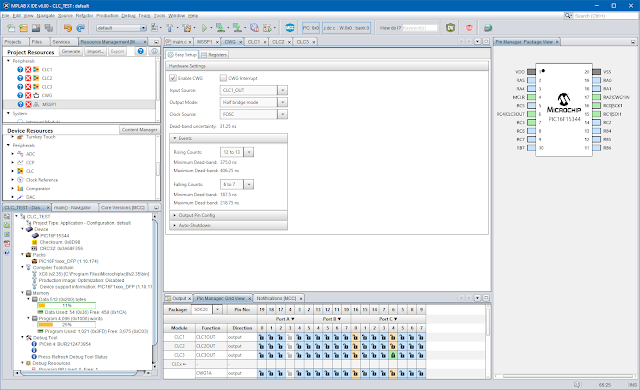 CLC2 is configured as 4-input AND. There I combine the inverted output from CWG1A, CLC1 and SDO from SPI to create the "0" signal: 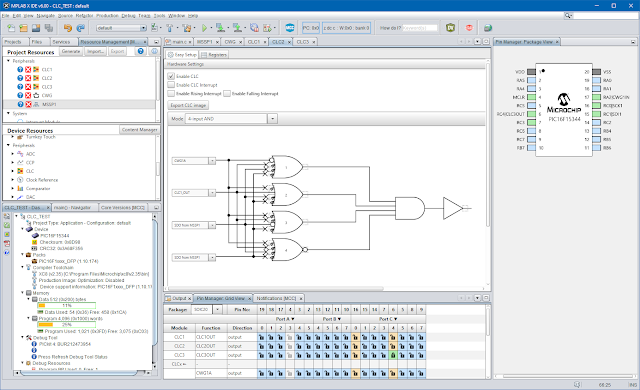 Finally, all is combined at CLC3 which is set as AND-OR cell: 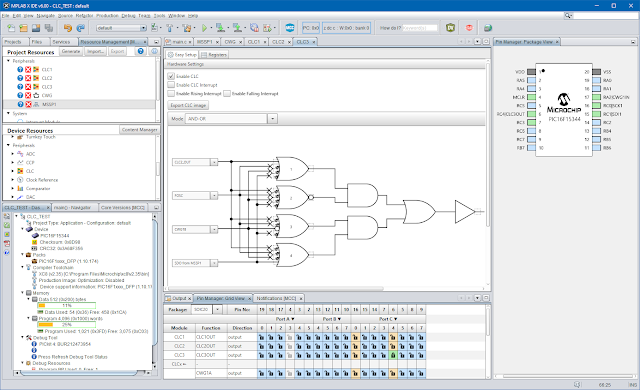 Here the inverted signal from CWG1B is "AND"-ed with the SDO signal to produce the "1" signal. Then both "0" (from CLC2) and "1" are "OR"-ed to form the final output signal which is routed to one of the pins - in my case RC4/pin6.

The timing here is much better and the beauty of this solution is that there is no interrupts, no assembler code. All of the above is just setup of registers. I am using MPLAB Code Configurator to generate all the code and the actual work is done by the hardware modules and for sending a single byte to the NeoPixels are needed only 2 lines of code. Here is the function to send the 3 bytes for red, green and blue:

Bellow is a video demonstration how it work with the assembler code. I adapted some of Adafruit library functions for this demo: rainbow, their table for gama8 function and the function for HSV color.