Couple of years ago I purchased from a local store 100 MHz crystal resonator and tried several times to make a working schematic on breadboard using standard circuits I found on the internet. It never worked good enough, usually oscillating at 33.3 MHz instead of 100 MHz. Finally, I found that the crystal is third overtone type. Here some documents, that were useful for this project:

I used as a base the schematic from first document and here what I design: 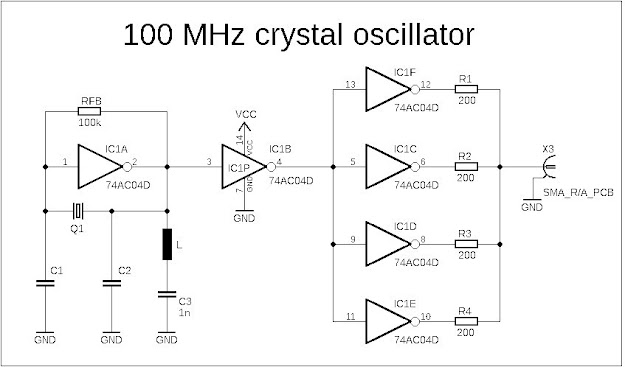 The actual schematic which I used is this: 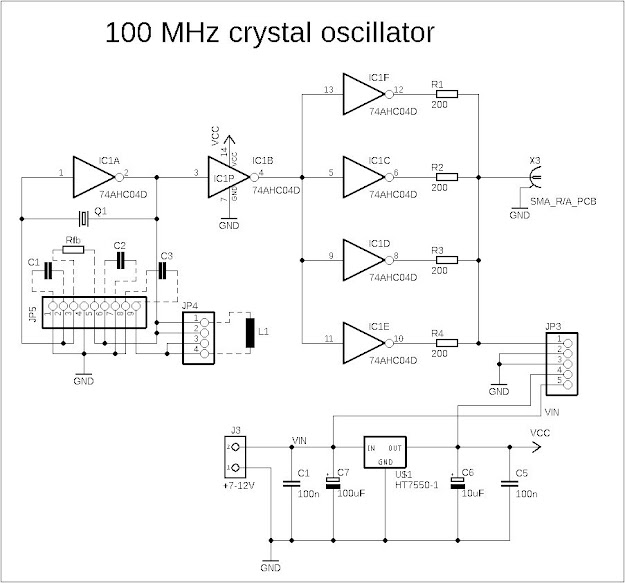 It is very simple circuit and the idea was to solder a female pin headers and then to put capacitors, inductor and feedback resistor on them and try different values until the circuit work stable, and then remove the pin headers and solder the element permanently on the board. The schematic have 5V voltage regulator allowing it to work with supply voltages from 7V to 12V. In case we want to use 5V there can be put jumper between pin 4 and 5 of JP3 which effectively bypass the voltage regulator. The schematic use very fast variant of 7404 hex inverter - 74AHC04 which have propagation delay below 10ns. The oscillator is build with one of the inverters and the rest of them are connected as a buffer with 50 ohm output impedance.

The output frequency (according to my oscilloscope) is 100.017 MHz, which is OK.
Is it worth the hassle? No. On ebay or aliexpress you can buy 100 MHz active crystal oscillator for a dollar. In fact I ordered 5 pcs to compare them to my schematic. But I made it as a proof of concept and I am happy it finally worked.

The signal waveform is supposed to be square, but my oscilloscope is only 70 MHz, and anything above 50-60 MHz shows as sine wave.

The Gerber files for this project can be downloaded from here: Link
в 01:17