A couple of months ago I bought a Chinese Android tablet Cube U35GT2 , which is quite nice although it has its downsides. One of them is the charger included in the bundle. It is a typical Chinese charger rated 5V/2A and it gets very hot when I use the tablet while charging. Eventually it burned out and I got to repair it - the output filter capacitor was blown up and I replaced it and also replaced the catch diode with a higher rated one.
But this was not the main problem. When using the tablet while charging, the touchscreen behaves erratically - there are phantom touches on the screen which make it hard to use. After googling the problem I found out that the main suspect for such behavior is the charger.

My first idea was to buy a new charger, but I was not sure that it will not behave the same way. So I decided to make a new one. I had a previously bought DC-DC converter with LM2596-ADJ and also an adaptor from a scanner rated 24V/550mA with real transformer inside.
My plan was to use the adapter and to fit inside it the DC-DC module to get the 5V/2A output.
The DC-DC module is with adjustable output voltage and is supposed to provide up to 3A current. It is very small and fits inside the case with ease. It turned out that 2A consumption from my tablet is too much and it gets so hot that the solder on some of the elements melted and the internal protection of the chip switches off the module.

But I did not give up easily so I made a new DC-DC module with LM2596-5.0 which has 5V fixed output voltage. I designed the new PCB to be as big as possible to fit inside the adapter and to have enough clear space to mount on it a small heatsink.

The schematic is the same as in the datasheet with an additional ripple filter. I chose the elements with large reserve - the catch diode is rated 8A, the main inductor is rated 5.5A and the inductor in the ripple filter is rated 4.5A. All of the elements are SMD except the input filter capacitor. As you will see in the photos bellow it is very custom made PCB and the board fits very tight in the case.

There was a glitch in the first run - in the rush to finish it I had soldered the output cable with reverse polarity and when I plugged the cable in the tablet, it blacked out and did not power up anymore. Thank goodness when I plugged the original charger it started to charge and came to life. After that I corrected the mistake and tried again, this time with success :)

The new charger also gets hot but not too much and more importantly it does not have that problem with the touchscreen of the tablet, so I can play my favorite games while charging the battery :)

Here are some photos of the project: 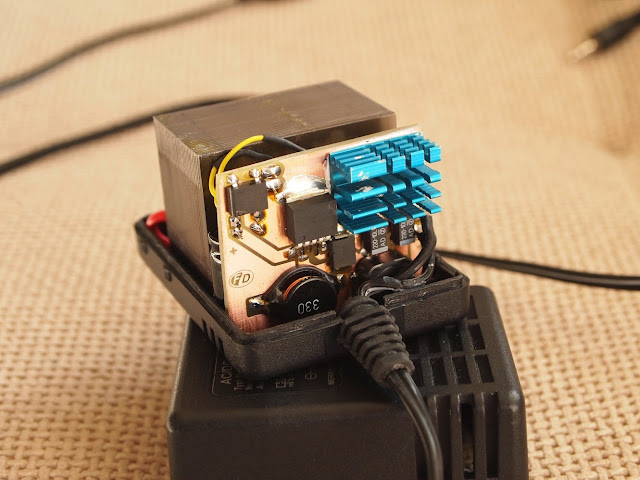 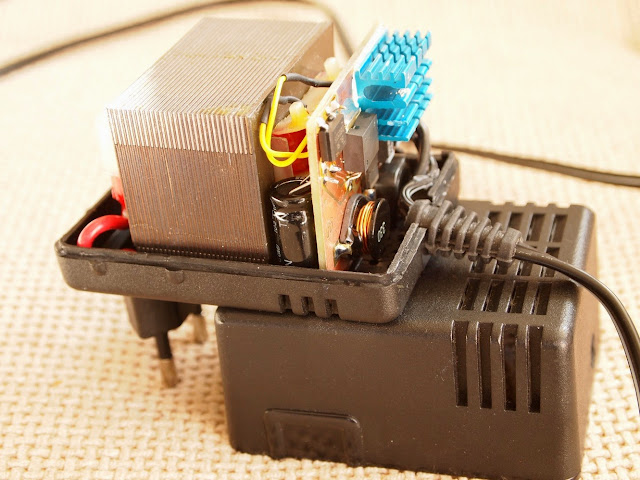 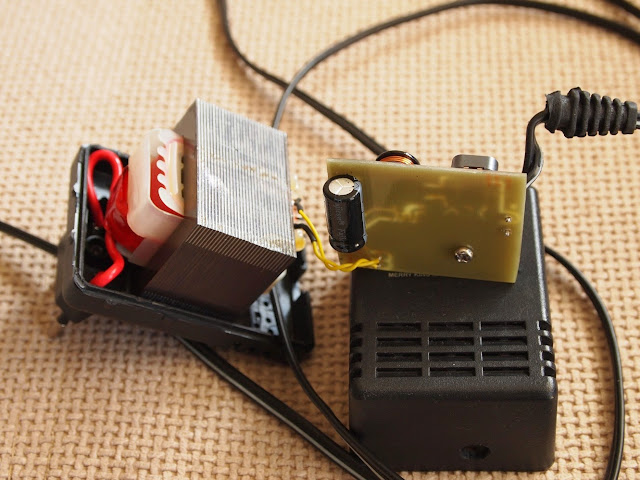